The landscape of computer storage devices changes dramatically year after year. Whether a new line of PCIe 4.0 M.2 solid state drives hits the shelves to coincide with a new motherboard chipset, or it’s something as simple as a new high RPM becoming the norm for platter-based hard drives, it’s a technological field that continues to evolve. And just like data storage solutions themselves are evolving, so too are the accessories and peripheral technology that comes with them. That’s where external drive docking stations from Wavlink come in.

Wavlink is just one of many manufacturers that are trying to help consumers keep up with changing storage tech, and we took two of the company’s drive docking stations, the ST334U Dual Bay Docking Station and the X-MAN Communicator D3 Docking Station, for a spin to see how they stack up. Both docking stations are solid, reliable pieces of peripheral hardware, and their additional features are really what make them stand out in the market. 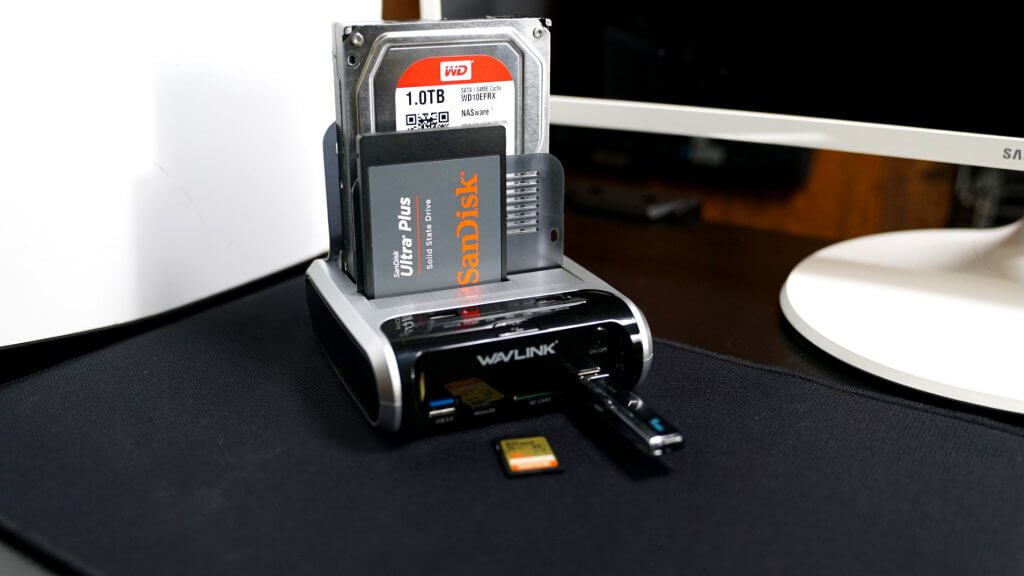 Both of these docking stations are equipped with dual drive bays, despite only one being named a Dual Bay Docking Station. They both also do a lot of the same things, like provide an option for offline drive cloning as well as a speedy USB 3.0 solution for external storage hookups. As you’ll notice on Newegg, however, the X-MAN runs pricier at $129.99, while the Dual Bay sits at $96.99 (those are the MSRP numbers – click the links to head over to the product pages for current information). This difference in price is largely due to the difference in extra features. Both are designed for the same primary goal, sure, but the X-MAN has roughly $30 worth of extra goodies. Both are very powerful devices, though, and depending on your needs, it’s easy to find a good use for both.

We’ll start with the X-MAN, as it’s the more expensive of the two and boasts more features. Unlike most docking stations or other external hookups for HDDs and SSDs, the X-MAN Communicator D3 also includes hookups for a variety of other storage hardware. There’s an SD card slot, a Micro SD slot, two USB 3.0 slots, and even two USB charging slots. Basically, this isn’t just a drive dock, it’s an everything-involving-external-storage dock. The X-MAN’s capacity is impressive, too, supporting up to 10 TB of data at once. We’ll get into specific use cases later, but this dock doesn’t require any drivers, so you can plug it in and start using it immediately. 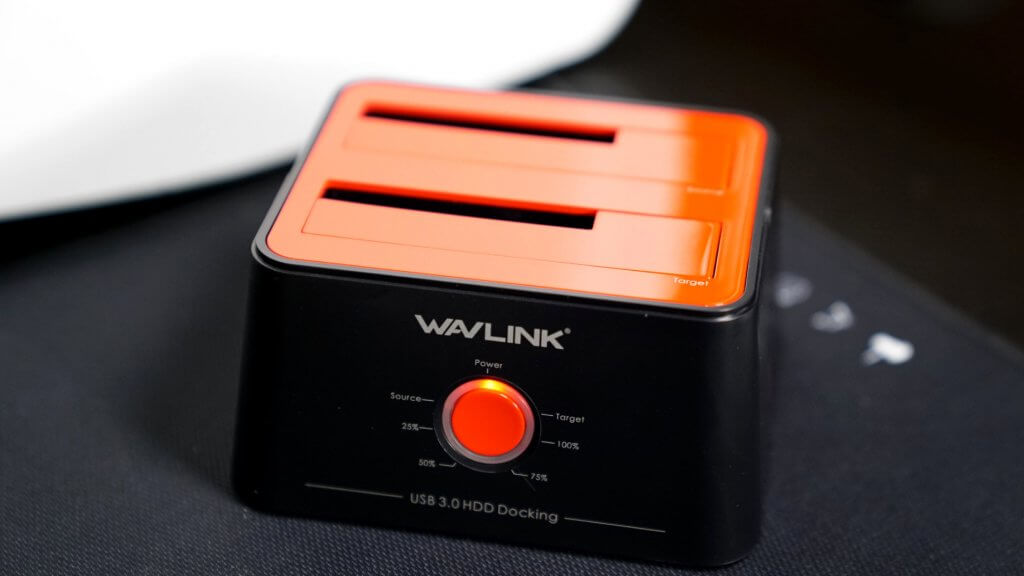 The lower priced dock, the ST334U Dual Bay Docking Station, supports slightly less at 8 TB, and it doesn’t have any of the additional slots or connection options—it’s just the two docking bays. This one was made for one main purpose, though, and it does the job very well: cloning. Its unique start button and LED interface make the process streamlined and easy. For any hardware professionals out there, you’ll know as well as we do that drive cloning wasn’t always such a simple thing. With this product from Wavlink you just plug in the drives (one into Source and one into Target), and hit the big red button. The cloning begins, without the need for any software, and the LED status indicator lets you know how the process is going. The X-MAN is just as easy to use, but again, it’s more expensive, and offers some additional features. 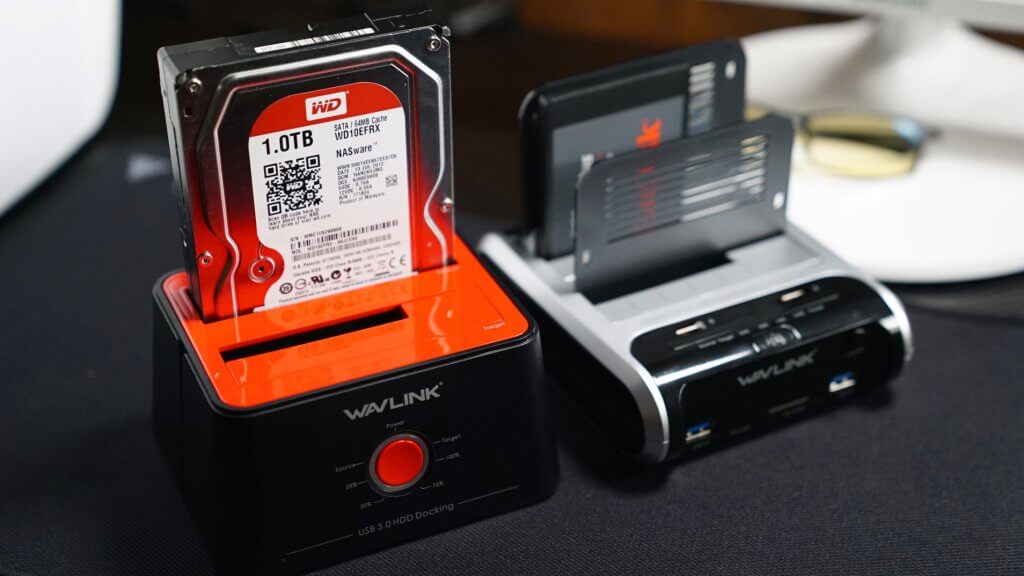 Here’s a quick rundown of the features in each of these two docks. 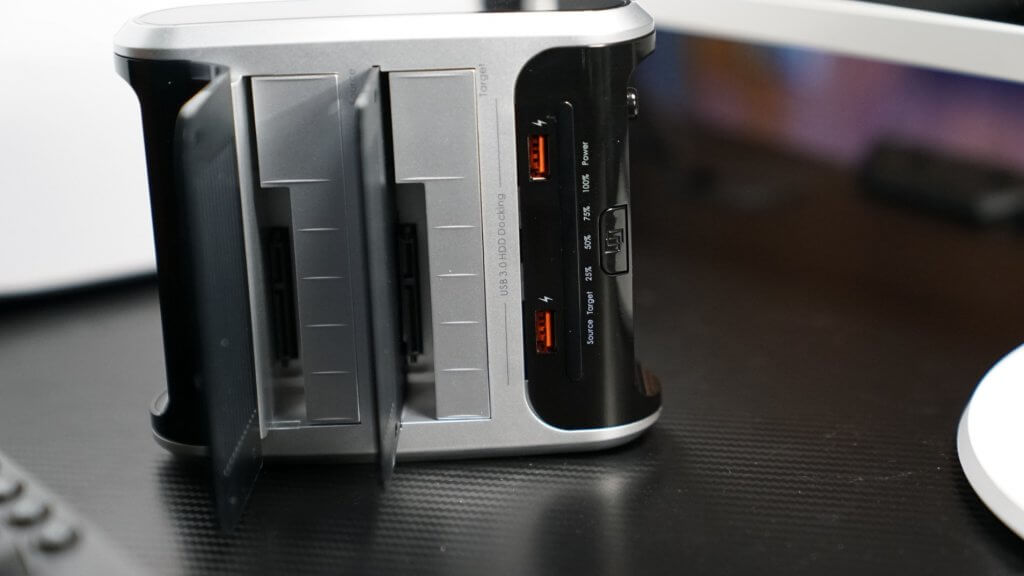 The design of both docking stations is impressive. They’re both pretty sleek, and they don’t take up a lot of space. The more expensive X-MAN Communicator is coated in a matte silver accent to help the black parts stand out, which really helps the various ports on the front of the device pop and be more noticeable. The drive bays, though, are the best part. There is one grated bay guard for each of the two drive bays, which is very unusual for a docking station like this one. It gives the whole product this very 90s-cassette player vibe that feels and looks really cool, and it would be a great addition to a workstation desk just by its looks alone.

The other docking station, the ST334U, is no slouch either. While it’s designed like most docking stations on the market, there are two things that really make it pop. First, the paint job. There are a couple of different color combinations to choose from—we had the red one in-house for our photos. It’s matte-black all around the outside, and the top (where the drive bays are) is a shiny painted red. It’s simple, clean, and it stands out. The second highlight is its drive cloning progress wheel on the front, which lights up with a bright LED to show you the progress of the cloning process. This is perhaps the best part of the docking station, as you just plug in two drives, hit the button, and watch the pretty ring fill up. It’s a bit mesmerizing. 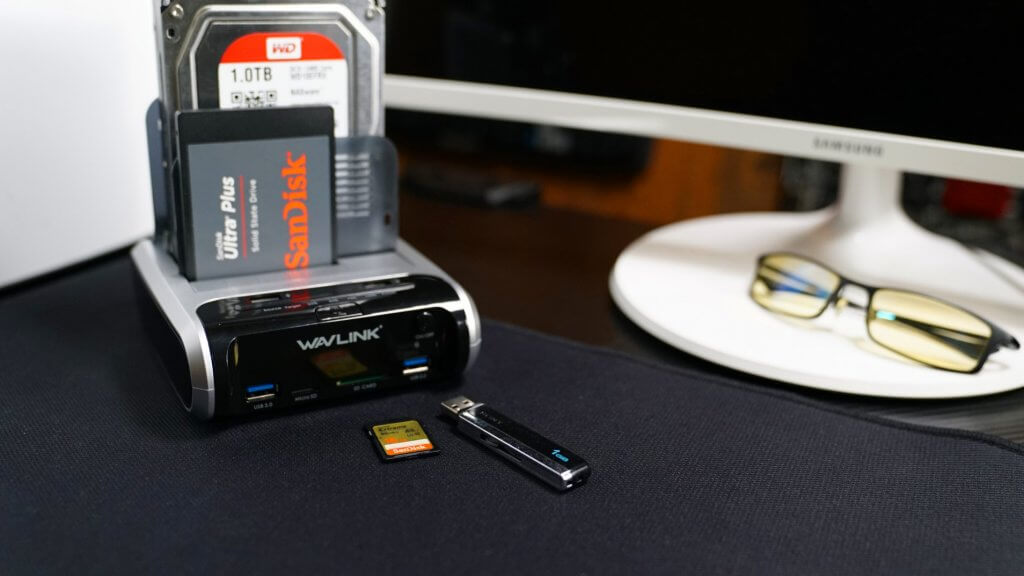 The performance of these devices is top-notch. Accessing data in the drives is speedy (with data transfers up to 5 Gbps in both docks), cloning goes quickly and without a hitch, and the X-MAN’s additional storage ports work just as well. With solid performance like this, it’s easy to think of a few use cases where devices like this would come in handy.

The X-MAN’s additional ports make finding use cases for it simple. With the USB 3.0 ports, as well as the SD and Micro SD ports, you can plug any manner of external storage devices in to access. Cameras, external drives, thumb drives, anything. You don’t need to think very hard to figure out why that’s useful. If you’re a content creator, for instance, such as a photographer or videographer, this would find a good home on your desk. The most useful feature of each device, however, is their ability to clone drives with great ease.

Have a failing drive? Plug it in with your new drive and hit the button. Want to migrate a PC to another PC? Same thing. Want to quickly back up all of your saved content, perhaps some of your life’s work? Plug the drives in and hit the button. What if you want to upgrade from a hard drive to a new solid state? Again, it’s just that easy.

Taking it for a spin 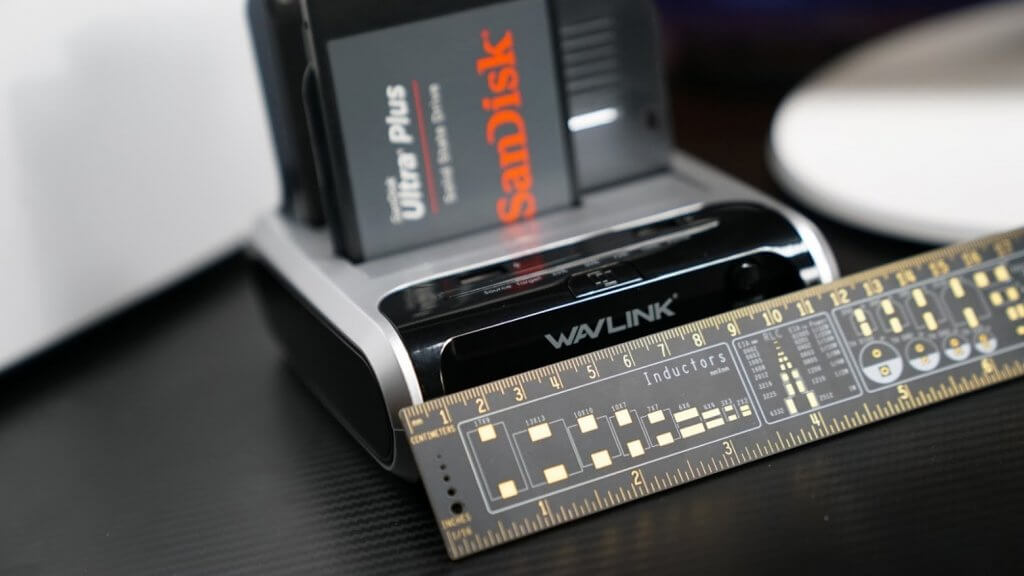 When we opened these docking stations up in the Newegg Studio, we naturally wanted to take one for a test run. We tested both, but I’ll be highlighting the process with the X-MAN here.

Right out the box, setup seemed easy enough. Plug in the power cable, the device cable, the drive I wanted to clone, and the brand-new solid state drive I’d be moving the contents of the first drive over to. There’s room for improvement when it comes to the setup process, as both the USB device cable and the power cable are on the shorter side. In order to plug the device into a power strip immediately below my desk the cable felt stretched, and I had to put the docking station a little awkwardly on the back of my work desk for the duration of the test. There isn’t much of a cure for the USB cable, but we at least recommend a power extension cable if you plan on hooking this up. Or at least some sort of power outlet on top of your desk.

The job was a simple one. All we wanted to do was clone the contents of a 1Tb platter drive to a 512 GB SSD. There wasn’t anything substantial on the HDD, just some Studio photos and raw video footage totaling out to roughly 50 GB worth of data. I didn’t use the extra device slots, like the USB 3.0 ports or either of the SD card ports, and instead opted to just attempt the key feature of the device—cloning. After plugging the HDD into the “Source” bay and the SSD into the “Target” bay, it was time to let it rip. I hit the big clone button on the front and waited for it to finish.

Over the next few moments, the progress bar on the front lit up from 25 percent all the way to 100 percent, and it was finished. I opened the drive’s contents on my computer, while leaving them plugged into the dock, and sure enough, the same folder full of studio videos and photos was there. All in all it was an easy process, and other than the cord length issue, it’s everything I can imagine wanting in a drive docking and cloning station.

Check out the X-MAN and the ST334U docks on Newegg for more information and current pricing and availability.

Headquartered in Shenzhen and with over 15 years of technology expertise, WAVLINK brand is rising rapidly in market of wireless network and comprehensive IT peripherals, which make things easier, smarter and more connected to people's life.